This graph shows the distribution or distribution stage diagram first described by Richard Wyckoff. And this scheme has been working for over a hundred years and will always work.

The essence of what is happening is that large professional players are selling off their assets, which they purchased at lower prices. Typically, this process takes place amid the backdrop of positive news. And retail traders, inspired by the growth, are happy to buy contracts at the top of the market.

Time after time, this range at the top of the market is formed according to the same principles. However, the visualization can be different. Next, I will describe in numbers the stages of distribution in more detail. Data from the futures market of the New York Exchange COMEX. 1 candlestick = 100 ticks. 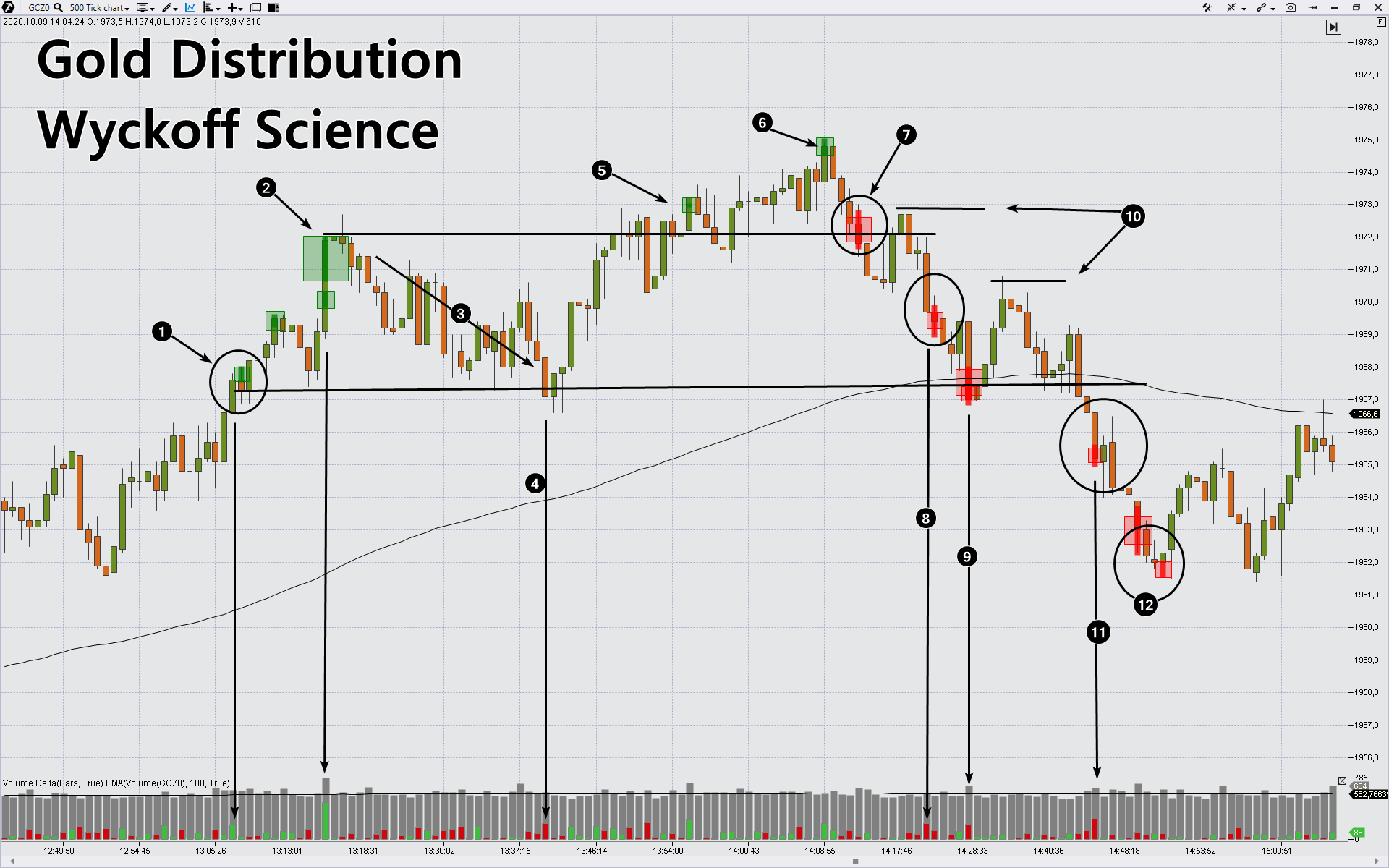 1- the beginning of the distribution zone. The extremely high volumes on the positive Delta are the first signs of distribution.
2- A huge spike in buying volume indicates that there is an anomaly in the market. This is the climatic action.

3- Big wave of sales. It is very protracted. This is usually perceived as a pullback, but see this pullback is very deep and much longer in both time and volume compared to previous pullbacks.

4- local selling climax on the surge in the negative delta. Professionals make a false breakdown of previous lows and then push the market higher to distribute more contracts.

5- here is a buying effort, which shows a surge in the green Delta. But there is no progress in growth. This suggests that professional traders use limit-SELL to sell their contracts into the hands of newbies at as high a price as possible. Number 6 is the same as number 5.

7 – unexpectedly for beginners, the price starts to fall. On the chart, we see an indication of massive selling. The pros have closed their long positions and have already formed a significant short position. And now they are pushing prices down with market orders.

8- another selling effort on the breakout of previous lows
9- local sales climax, hence a rebound on a low volume to the level of 50% from the previous decline should be expected.

10- That is right. The 50 percent Fibonacci level works. The market cannot resume growth.
11- Escape from the distribution zone. Massive sales. Buyers who purchased contracts higher than 1968 were trapped.